It is not surprising that we have a desire for something that feels “real” and gives us an intense feeling of being real and being present. Many other products are marketed to us in the same way – they promise experience and enjoyment of life. The interesting part that Iggers points out is that this desire is created and even satisfied more by the image than by the food itself. 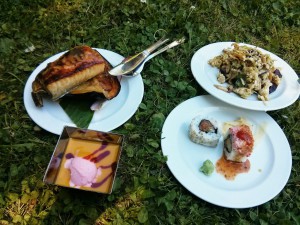 According to Iggers, branding of food allows for the creation of image and perception of particular products so that they create desired experiences in consumers. Therefore you’re more likely to enjoy branded chicken than a “no-name” chicken.

Since I’m already talking about the visual, I was thinking about all those photo-editing tools that make pictures look older. Fredric Jameson talks about “nostalgia for the present,” which creates the feeling that the present is already gone, a part of history. Anthropologist Arjun Appadurai says that a product that has this hint of nostalgia for the present is something we want to buy immediately “not because you will otherwise be out of date but because your period will soon be out of date.”/2 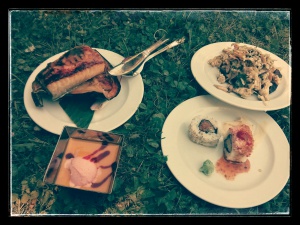 Again, we see this effort to enhance the intensity of the act of consumption. Consumption becomes urgent and needs to happen here and now, before everything ends. It gives us a feeling of being a part of reality and even history.

1/ Iggers, Jeremy. (2007) “Who Needs a Critic? The Standard of Taste and the Power of Branding.” In Food and Philosophy: Eat, Think, and Be Merry. Edited by Fritz Allhoff and Dave Monroe. Malden, MA: Blackwell Publishing.