TEXTure matters! What can chefs teach us about story-telling?

Posted on September 18, 2015 by knedlikyleaks

One of the most inspiring conversations I had with chefs and cooks during my fieldwork was with Milan [not his real name], a young curious cook, who tried to explain to me that every dish needs to make sense and ingredients have to be paired together according to a certain “logic.” For example, a dish with chicken may be inspired by what the chicken eats, or rather, ate, so it can go with corn, something grass-like, and so on. In that sense, innovative dishes and recipes can be seen and read as stories. They are not only material but also textual, and they hold together through matter as well as through meaning. They have TEXTure!

The great semiotician Roland Barthes said that Text is not a finite substance – it is relational, experiential, infinite, and irreducibly plural. It is a fabric of meanings and even the word text itself originally comes from the word fabric. (Latin textus means ‘tissue’ and comes from the verb texere, to weave.)

Can we say that great chefs are story-tellers? 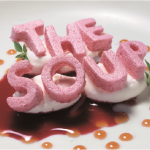 Consider the TEXTure of the Letter Soup dessert by the famous Chef Ferran Adrià of elBulli: Is it a soup? It says it is! but then again, it doesn’t look like soup. This moment of surprise and uncertainty is only the beginning of an infinite play of meanings. Like Text, as Barthes would say, “the soup” plays and generates pleasure in circular, rather than causal, movement. It sets us free from conservative ways of thinking in terms of cause and effect, and from desiring in terms of need and satisfaction. Ferran Adrià makes it okay for us to desire things that, according to conventional ways of thinking, do not make sense. And he knows what he’s talking about. After all, his desire is “to eat something that does not exist.”

Compare the philosophies of these two great quantum theorists: For Schrödinger, the task is to think originally and challenge one’s understanding of things while remaining in the realm of “the seen.” For Adrià, the goal is to change his understanding through feeling and being surprised (surprise happens when things emerge from non-existence and affect him emotionally). 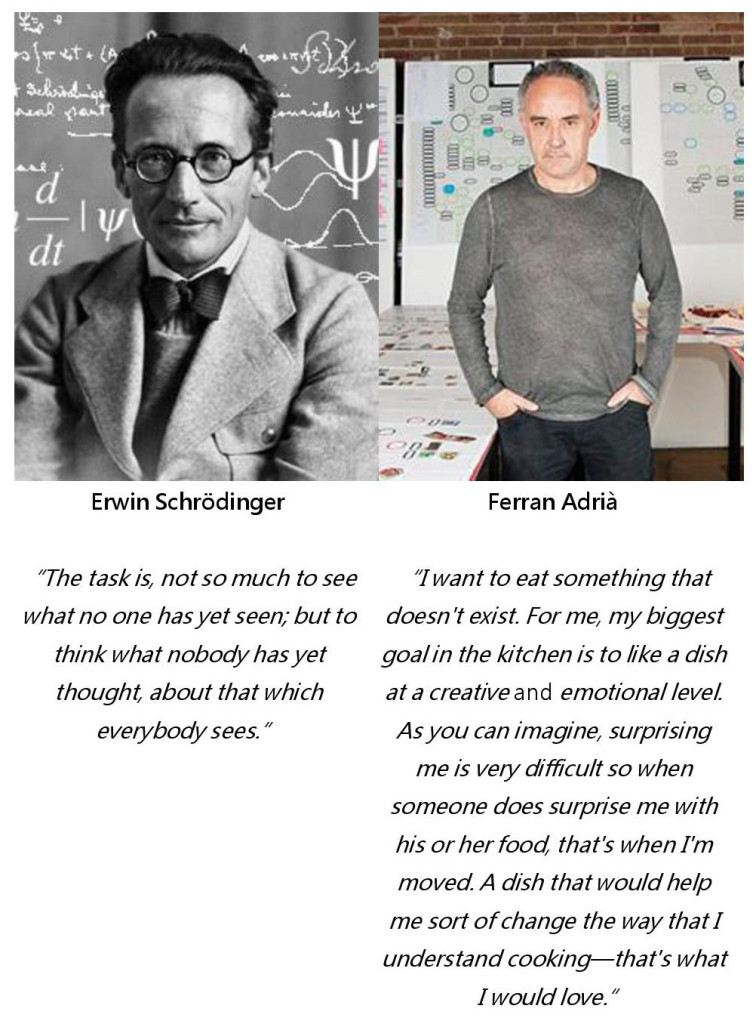 But what if Adrià finally ate something that did not exist and in the end, realized that he didn’t eat anything?

The downside of this “semiotic virtuosity” (a term used by Arjun Appadurai) is that it needs to be carefully orchestrated into something not unlike a symphony. In order to be appreciated, such a complex and complicated product also requires an investment on the part of the consumer, who could always end up asking – Did I get what I paid for? But if all goes well, the experience may be so profound that it can even inspire a musical composition, as in the case of the French musician Bruno Mantovani who composed a piece called The Book of Illusions: Homage to Ferran Adrià: “The piece is composed of 35 movements (one for each dish) through which the composer illustrates the texture of each of the recipes of the menu with music.“

As I wrote before, the senses and our sensory experiences can inspire creativity and innovation. However, we also need texts to give these experiences meaning. Only through meaning / sense-making / logics, can we understand, create, translate, and have an experience. Mantovani translated food into music and called it a “Book of Illusions.” He understands the importance of TEXTure – in food as well as in art.